Florida is vibrant and diverse in its culture and its ecosystems. 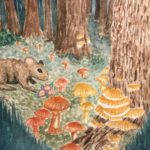 I chose the Key Largo woodrat as my endangered species as it is indigenous to the Everglades, a natural wonder of the sunshine state. This small rodent is an imperative part of the hardwood hammock habitat, being one of the most prominent yet unrecognized keystone species in the region. Its role in helping certain types of fungi and algae decompose organic matter is critical to the environment. Even though the Key Largo woodrat is so vital to this habitat, they are critically endangered due to the overdevelopment of land, stripping them of most of their resources, as well as introducing the common house cat as a new and unwanted predator. There are active efforts being made to restore the population of the Key Largo woodrat.

Florida is vibrant and diverse in its culture and its ecosystems.